VUCA Wars : The Rise of Teaming 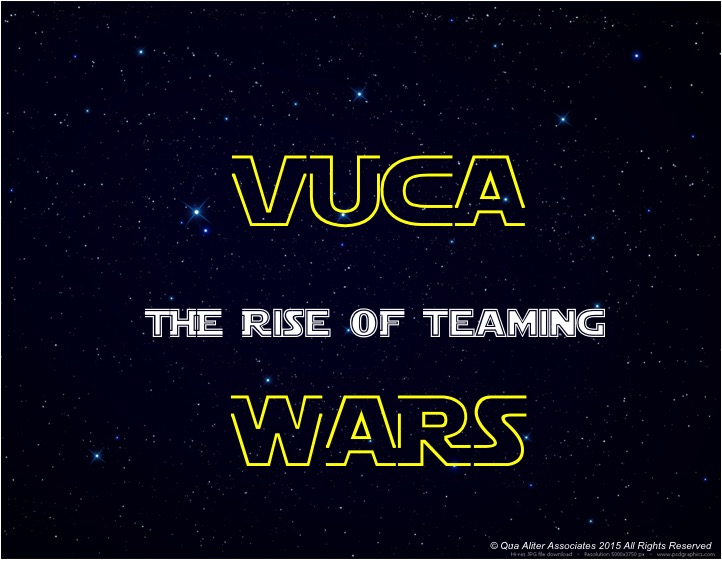 I can’t wait for December 18th 2015, the confirmed release date for the latest Star Wars movie,” The Force Awakens”. And the first one made without the original and iconic creator of the franchise, George Lucas, at the helm of affairs. I’ve always been a great fan of the Force, the special effects, the costumes and idiosyncrasies of the characters, the spectacular landscapes, the Jedi Knights, and their awesome sounding light sabres. And, of course, Darth Vader and the Dark Side who always held a menacing yet mystic charm - forces that the Jedi’s encounter throughout the saga and need to overcome with sheer agility and resilience. Agility and resilience - exactly what teams and organisations today need to overcome the dark forces of VUCA.

The term VUCA,  (which almost sounds like Darth Vader’s metallic breathing. Vuuuuu ….Caaaaa…) was coined by the US Army War College in the late 1990s to describe the dynamic nature of our world today and has caught on in a variety of organisational settings, to describe a business and working environment characterised by

●      Volatility: The nature, speed, volume, magnitude and dynamics of change

●      Uncertainty: The lack of predictability of issues and events

●      Complexity: The confounding of issues and the chaos that surround any organization

●      Ambiguity: The haziness of reality and the mixed meanings of conditions

Basically VUCA means that “change ain’t what it used to be” – the nature of the beast we knew as change has moved from being episodic and sequential, to being disruptive and continuous. With the dark forces of VUCA rapidly gaining ground, the previous concepts of change management, more applicable to the  pre-internet era of episodic change, therefore, get quite literally swept out the window. The new VUCA-ness requires individuals and teams to almost instantaneously and effectively self-organise, collaborate, learn and perform. In fact, in a VUCA world, the previous team paradigms of “forming”, “norming”, “storming” and “performing” are, to be blunt, as dead as a dodo, or Count Dooku, for that matter. (for those less reverent fans, Count Dooku was once a respected Jedi Master, but falls to the dark side of the Force only to be vanquished by Anakin Skywalker in the Revenge of the Sith). No longer do organisations and their operating units, whether functions or departments have the luxury to have teams working only as stable and static units of value delivery in their defined area of operation.

The new paradigm is “Teaming” - a verb, a process in action, where individuals almost organically assemble, engage, and execute based on the opportunity or the threat that the situation poses – entailing a shift in focus, therefore, from teams as static and pre-defined organisational units to teaming as a dynamic and responsive process. The rise of teaming defines the way that agile and resilient organisations respond and fight the dark forces of VUCA. Dr. Amy Edmonson, Novartis Professor of Leadership and Management at Harvard Business School in her book “Teaming: How Organisations Learn, Innovate, and Compete in the Knowledge Economy”, (a must read, in my opinion) elaborates “Teaming, coined deliberately to capture the activity of working together, presents a new, more flexible way for organisations to carry out interdependent tasks. Unlike the traditional concept of a team, “teaming” is an active process, not a static entity. Imagine a fluid network of interconnected individuals working in temporary teams on improvement, problem solving and innovation.”

§  Being aware of others need, roles and perspectives.

§  Listening to and absorbing other points of view

§  Making collaborative decisions, based on the integration of different perspectives

§  Coordinating actions, with continuous and iterative sharing of progress

Teaming thus calls for developing both affective (feeling) and cognitive (thinking) skills. Enabled by distributed leadership, teaming helps expand knowledge and expertise so that organisations and their customers can capture value, innovate, grow and thrive. The world’s leading innovative organisations – Google, Apple, Pixar, Zappos, IDEO and Toyota, just to name a few, are all inculcating the DNA of teaming in some form or the other. In my own experience at SAP, I have used teaming as a process to facilitate and drive complex account management engagements, as well as a means to come up with innovative approaches to uncover and drive customer value.

In effect, teaming brings people together to generate new ideas, find answers and solve problems, and is a core process that builds the agility and resilience within the organization. Effective teaming is a learned behaviour, and does not come naturally to most organisations. And like any behaviour, teaming requires coaching and practice to be inculcated and imbibed.

2.     Collaboration: Teaming requires a collaborative mindset and behaviours – both within and outside a given unit of teaming – to drive the process.

3.     Experimentation: Teaming involves a tentative, iterative approach to action that recognises the novelty and uncertainty inherent in every interaction between individuals.

4.     Reflection: Teaming relies on the use of explicit observations, questions, and discussions of processes and outcomes. This must happen on a consistent basis that reflects the rhythm of work whether that calls for daily, weekly or other project specific timing.

Organisations depend on capable leaders and teams to deliver the agility and resilience required to help them navigate through turbulent VUCA times, and in the process achieve their objectives. The attitudes, behaviours and enhanced skills needed to be effective at the crucial process of “teaming” are vastly different from those required in teams in times of incremental and episodic change from not so long ago. In fact the rise of teaming requires enlightened team stewardship, almost like the advent of a Jedi knight with special awareness, insights and capabilities – something I’d like to call being a leader-coach.

So what does it take to become an effective leader-coach? How does one build the Jedi traits and skills within oneself and others to ensure effective teaming? How can coaching principles, paradigms and processes inform, enrich and enhance effective teaming in a VUCA world? What are some of the practical applications and real world experiences of teaming? And did Lucas underestimate the passion for the Force, when fans sued him for modifying some of the original scenes from the early Star Wars movies?

Questions, I hope to address as part of the continuing VUCA Wars saga. Stay tuned. And May The Force Be With You.